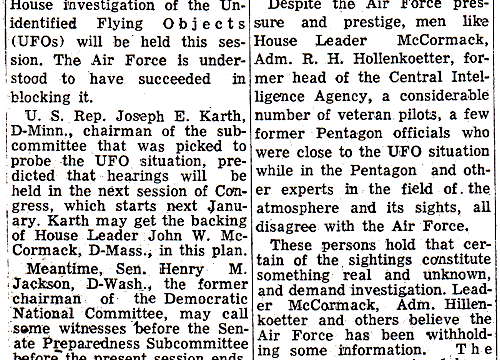 was picked to probe the UFO situation, predicted that hearings will be held in the next session of Congress, which starts next January. Karth may get the backing of House Leader John W. McCormack, D-Mass., in this plan.

Despite the Air Force pressure and prestige, men like House Leader McCormack, Adm. R. H. Hillenkoetter, former head of the CIA, a considerable number of veteran pilots, a few former Pentagon officials who were close to the situation while in the Pentagon and other experts in the field of the atmosphere and its sights, all disagree with the Air Force.

These persons hold that certain of the sightings constitute something real and unknown, and demand investigation. Leader McCormack, Adm. Hillenkoetter and others believe the Air Force has been withholding some information. The move for congressional hearings will continue, it is indicated at the Capitol.