I used the keyword “UFO” for my initial search, and found that the Archives have 11 UAP files listed. These are: 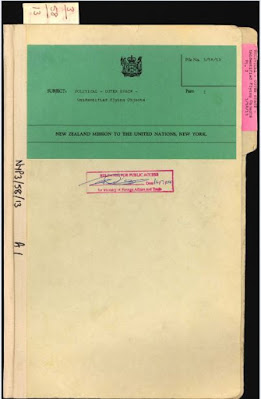 The bulk of the file concerns one topic only. This is the attempt by the country of Grenada to have the United Nations adopt a 1978 draft resolution by Grenada, at the United Nations, “Establishment of an agency or department of the United Nations for Undertaking, Co-ordinating and disseminating the results of research into Unidentified Flying Objects and related phenomena.” There are numerous internal U. N. documents; and correspondence between the U.N. New Zealand Ambassador and the Department of Foreign Affairs in New Zealand. Grenada was eventually persuaded to withdraw its resolution and instead adopt:

“That the General Assembly requests the Secretary General to transmit the text of the draft resolution together with the above mentioned statements to States Members of the United Nations  and to interested specialized agencies, so that they may communicate their views to the Secretary general.”

Although the details of the affair are well know in the UAP literature, this file brings the New Zealand perspective and internal thoughts on the matter, into the public arena, and is therefore well worth a read.

An interesting aside, is that in a 2017 blog by Melbourne researcher Paul Dean, who had noted that this file was in the New Zealand Archives; and without seeing its contents,  had written:

“One can only speculate as to what an MFAT file may contain. One possibility, given the 1977 to 1982 date range, is that the records relate to a UFO awareness raising initiative at the United Nations, led by Sir Eric Gairy, the then Prime Minister of Grenada, in the late 1970’s. This effort resulted in a series of plenary meetings and decision adoptions in late 1977, which culminated in a Special Political Committee Hearing on the 27th of November, 1978.”

A series of incidents occurred in December 1978 around the Kaikoura region of New Zealand. There were visual observations by airline pilots; which were also filmed by an Australian TV crew; together with anomalous radar returns. Investigations were conducted by a number of government agencies within New Zealand.

On the digitized file there is a SAVINGRAM document, from Wellington to all posts – re UFOs – Kaikora, dated June 1979. This included the following text:

“Prospect of Extra terrestrial intervention being proved is regarded as extremely remote.” 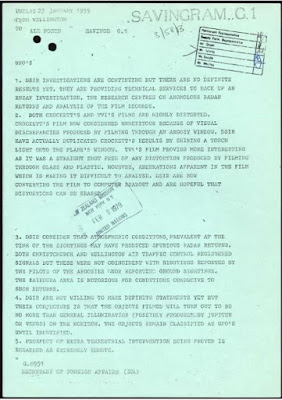 I look forward to more of these Archive New Zealand UAP files being made available in digitized format.

Final note: It was only through the tireless work of Susan Hansen, the Director of New Zealand’s “UFO Focus New Zealand Research Network” that the New Zealand Defence Force released their files. Click here for their website.

This post was originally published by UFOs Scientific Research Blog on February 21, 2021 2:20 am. Please visit the original post to read the complete article.