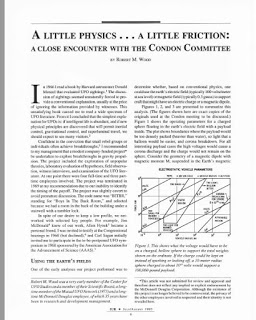 The Wilson/Davis notes of 2001, and comments by a number of the leading players, have directed our attention to private United States (US) aerospace companies, as the place to look for reverse-engineering opportunities in respect of Unidentified Aerial Phenomena (UAP.)

Much has been written about the Bigelow Aerospace Advanced Space Studies (BAASS) era, where employees were scouring the planet for information about UAP propulsion systems. However, other US aerospace companies have used the study of UAP, to provide them with intelligence on potential advanced propulsion systems. One such company was the McDonnell Douglas Corporation, in the time frame 1967-1970.

In the July/August 1993 edition of the International UFO Reporter, former McDonnell Douglas employee, Robert M. Wood discussed, in part, a study conducted by his company between 1967 and 1970. Part of the article reads:

“I recommended to my management that a modest company funded Project be undertaken to explore break through in gravity propulsion. The Project included the exploration of unpopular theories, laboratory evaluation of hypotheses, field observations, witness interviews, and examination of the UFO literature. At one point there were four full-time and three part-time employees involved. The Project was terminated in 1969 at my recommendation due to our inability to identify the timing of the Payoff…The code name was “BITBR” – standing for “Boys in The Back Room.” 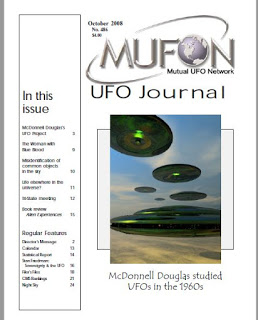 The October 2008 issue (pp3-8) of the MUFON Journal carried another article by Robert M. Wood titled “McDonnell-Douglas studied UFOs in 1960’s” This article provided details about the origin of the Project; the names of the employees involved, and their areas of expertise. The individuals named were:

* Dr. Joseph M.  Brown – full-time. PhD (Mechanical Engineering.) His theory may be read in full, in the 2004 book “The Grand Unified Theory of Physics” Basic Research Press, Starkville, MS. In the book, he describes his work on the UFO project at McDonnell Douglas.

* Chan Thomas – part time – a psychic with an interest in geological catastrophes.

“The only contact with the Government about the Project came towards the end of the spring of 1970 when there was interest expressed by one of the intelligence agencies. This resulted in a draft proposal to “mimic, imitate or duplicate the observables associated with UFOs.” We called this potential opportunity Project Skylite, and prepared a good deal of technical information in anticipation of contract work. It never materialised with McDonnell Douglas to my knowledge.”

Jacques Vallee’s “Forbidden Science: Volume 2” (FSV2) page 412 addresses the question of whether McDonnell Douglas as a company, did in fact continue its UFO work?

“…Yesterday I received a phone call from a fellow who works with McDonnell-Douglas Astronautics. He told me that, “on a private basis,” he was compiling a new close encounter database. I am not stupid enough to believe his company has no corporate interest in the matter. They have an on-going secret project, well-funded, with the blessing and official monitoring of the CIA and they’re discreetly connected with major UFO groups, all of which love the secret intrigue of a link to the spooks…”

On page 440 of FSV2 there is also the following:

“McDonnell Douglas is continuing their quiet but well-funded study with John Schuessler also monitored by the Agency. They seem to be looking for exotic alloys.”

“These so-called tycoons have also contacted Stanton Friedman, a physicist who was part of the secret CIA/Douglas aircraft study a few years ago..”

Although I have looked for documentation concerning Project Skylite, I have not found any. Has any blog reader come across further information on Project Skylite?

Looking around for copies of documentation relating to BITBR, I located a 275 page PDF of project papers, in apparent random order, courtesy of US researcher Barry Greenwood, and a website which included18 PDFs of sets of Project papers. The website was particularly useful because it presented the PDFs in date order, allowing a chronological overview.

I will present a brief overview of each of these 18 PDFs, and will extract information which seems most relevant to me.

3. Memo. Brown, J. M./Harman, D.  to Wood R. M. 20 Dec 1967. 8 pages. “Proposal for Electrostatic/Magnetic Experiments.” “The Kinetic particle theory of physics has introduced the existence of several types of Electrostatic/Magnetic Phenomenon  which are not predicted to occur by Maxwell’s electromagnetic equations…”

* The introduction contained a slide which included “What we’ve learned from UFOs – a DFO can be built – UFOs give clues.”

* An overview of the size, shape, motion and field effects from UFO reports

The idea that you could gain insights into the processes by which UAP move, seems to have also been a driving force behind Project VISIT. In 1976, NASA scientist John F. Schuessler, formed a group called Project VISIT short for Vehicle Internal Systems Investigative Team. One aim was to look at the internal systems of what Project VISIT called Unidentified Space Vehicles.

* Preliminary conclusions from the observables include “cannot escape the hypothesis that some UFOs are intelligently controlled vehicles (Aerospace companies must reflect this possibility in their planning.)” “Vehicles must be extraterrestrial.”

* Presentation of the theory of J. M. Brown – experiments

Note the mix of UFOs and psychic phenomenon, and especially with the employment of psychic Chan Thomas and his unconventional ideas.

Note the repeated use of the term “UFO observables.” 50 years later, we find Luis Elizondo of TTSA using exactly this term “observables.” Interestingly, we knew of these same observable right back from the 1950’s and they have been a constant factor in the UAP ever since.

* “Competitor’s efforts; Hughes (10 men at Fullerton under Meiers); Lockheed Sunnyvale; Rand has proposed project; Martin had (has) gravity project (As has several other companies.) Several companies have UFO related efforts. Raytheon (had a computer project from Condon/U. of Colo.) Other countries in business – Russia has UFO project.”

“A curious incident recently took place during a conversation with a Martin Marietta engineer who says he is compiling a reference book on UFOs…” The engineer circulated a black binder with material in it, and when someone turned a page “The engineer leapt out of his chair like a tiger and tore the binder away, tersely spitting out “…the other papers have nothing to do with that! We were left fairly shocked at the violence of his reaction. Of course we began to wonder what else might be in that binder. There are rumours that major aerospace companies are conducting their own secret studies of UFOs.”

“The vast majority of the “vehicle” sightings indicate that strong magnetic fields are generated by the vehicles. These fields are presumed to be connected with the prolusion system.”

7. Memo. Brown J. M./Wilson, P. 1 Aug 1968. 1 page. “Interview with Barbara J Hickox.” “Mrs Hickox reported…that she had seen and ridden in an aerospace vehicle manned by extraterrestrial beings. The purpose of the visit was to explore the possibility of obtaining useful technical information from Mrs Hickox. …We did not discuss her observations made while aboard the vehicle…She talked about a unique method for producing a vacuum…I absolutely could not make sense of what she was saying…”

9. Memo. Brown, J. M. to Wood, R. M. 16 Sep 1968. 4 pages. “Current recommended tasks for 3-6 man effort.” Discusses theoretical and experimental approaches. On the theoretical approach: “The principal concept we have been pointing towards is a scheme in which randomly moving particles are organized then directionally released for performing work. It is strongly believed that gravitation is produced by an organizational mechanism…The theoretical approach should be expanded…the experimental program is being expanded…Ancillary investigations of phenomenon, other unusual phenomenon and contactees are being minimized…”

11, Memo. Thomas, C. to Wood, R. M. 22 Aug 1968. 20 pages. “A new communications mode.” reports on experiments conducted in 1965 using a “transmitter” and “receiver” to transmit mind to mind card suits. Then follows up with what appears to be mental communications with entities of unknown origin, discussing space ships and their operation.

We learn from Wood’s MUFON Journal article, that a van was outfitted with equipment, and that Paul Wilson, spent a week at the top of Red Mountain due to reported UFO activity there, but with negative results.

13. Memo. Friedman, S T to Royer, D L, 18 Jun 1969. 1 page. Regarding searches in literature son round or lenticular shaped aircraft; and electrical and/or magnetic devices for propulsion or control of aircraft,

15. Memo. Brown, J. M. to Wood, R. M. 17 Sep 1969 4 pages. “Fundamental constants of physics – speed of light.” “In butino theory this speed is a constant with respect to the center of mass of the “local” background in which it is being transmitted.”

* Notes: “Field data acquisition” to be used by us and Atmospheric Sciences Department

This post was originally published by UFOs Scientific Research Blog on September 22, 2020 5:17 am. Please visit the original post to read the complete article.

A Brief History of Ufology: 1941–2011: Significant UFO Events Throughout the Modern Era
$9.99
Buy on Amazon

ETs Among Us 5: Binary Code - Secret Messages from the Cosmos (with Linda Moulton Howe)
$2.99
Buy on Amazon
Bestseller No. 2

Glimpses of Other Realities: Facts and Eyewitnesses (Volume I)
$185.95
Buy on Amazon
Bestseller No. 3