You are here: Home / Scientific Research / Task Force of the House of Representatives Committee on Armed Services given briefing on UAP 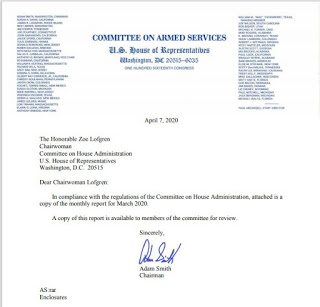 Note, that even though the item is under the heeding “Full Committee Progress” unlike all the other items which state that “the full committee met,” this one states that “the task force met.”

Now, the full committee consists of 31 Democrats and 26 Republican members. There are six permanent sub-committees on the Armed Services Committee, namely:

Intelligence and Emerging Threats and Capabilities.

Each of these sub-committees consists of a number of members from the full committee.

So, what does the reference to a Full Committee Task Force mean?

This might imply that there is/was a Full Committee Task Force with a task concerning Unidentified Aerial Phenomena. However, a search of the relevant House of Representatives Armed Services Committee website failed to locate such a Task Force. The only Task Force running on 11 March 2020 was the aforementioned Future of Defense Task Force. Is there anything in its final report about Unidentified Aerial Phenomena? A  search of that document reveals that there is no such reference. The most reasonable conclusion, however, is that the 11 March 2020 classified briefing on unidentified aerial phenomena was indeed given to the Future Of Defense Task Force. Can any blog reader confirm this?