You are here: Home / Reviews / Review: A.D. After Disclosure 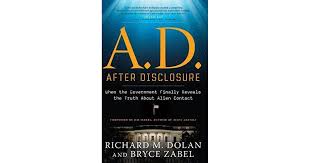 In this post I’m going to review the book A.D. After Disclosure: When the Government Finally Reveals the Truth About Alien Contact by Richard M. Dolan and Bryce Zabel.

Imagine that at some time in the very near future, probably on a Friday (for reasons that are explained in the book), the leaders of the USA, UK, France, and many other nations hold a press conference at various hours according to their respective time zones. At these conferences it is announced that not only do non human extraterrestrial intelligences exist but that certain sections of the human race have been interacting with them for over sixty years.

What would be the impact on society? This book examines the potential effects on people, the economy, religions, culture, art, technology, and many other aspects of human activity.

The initial effects would of course be enormous and without parallel in human history. As the book’s title suggests there would be the world before Disclosure and the world after Disclosure. Life would never be the same again and in one afternoon all our lives would be changed forever. The repercussions would go on for decades.

What if this act of disclosure was carried out in stages with only a little information released at a time?

Would the Earth’s 7 billion inhabitants find it easier to digest the news or would they grow angry when they realise how much information had been withheld?

The book speculates on the immediate aftershocks in the first days and weeks. Then it extrapolates on this to wonder about the benefits and ramifications over months and years.

Would there civil unrest?

If certain people couldn’t cope with this news would there be panic buying and stockpiling of food? Would religious leaders talk up the prospect of Armageddon and the Apocalypse? Some might not be able to absorb the realisation that ET really is in the neighbourhood. There is likely to be a degree of fear as the collective mind of the human race undertakes a huge paradigm shift.

Scientists might be among those who find it hard to take in as they realise much of their understanding of physics has to be reviewed and adjusted.

What if it was revealed that alien technology not only existed but was already in the hands of private contractors working for governments? And what if this technology was so advanced that it could provide free zero point energy that would empower every person on the planet to heat and provide light in every home? What would the impact be on those with a vested interest in the oil industry?

It is alleged that the secret of this interaction during the past six decades has been maintained with the two weapons of denial and ridicule and the process has worked. Try raising the subject now and you’ll still be regarded with at least wry amusement and possibly hostility by those fearful of even discussing it.

How would we react when we realise that our governments have not only kept us in the dark for 70 years but they have also colluded with private contractors and spent trillions of tax dollars on projects that involved reverse engineering spacecraft? All aspects of the possible repercussions are considered. The book raises more questions than it answers but it does provide the reader with the ample food for thought.

The sharing of information on the web combined with the acclimatization of the public mind (planned or by coincidence) by books, films, and TV programs has brought us to the point at which we may be just strong enough to be ready for Disclosure.

Many brave people within the government, military, commercial, and civilian world have come forward to provide their testimonies. The work of Dr Steven Greer and the Disclosure Project is mentioned and it is clear that we are approaching the point of change.

A.D. After Disclosure is a thought provoking read that will spark your imagination and stimulate your curiosity. That has to be a good thing in an age of fake news and misinformation.