You are here: Home / Scientific Research / Paper on UAP published by the Begin-Sadat Center for Strategic Studies at the Bar-Ilan University in Israel 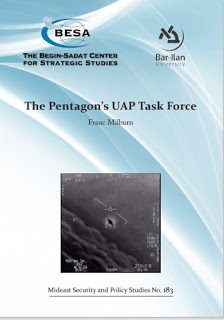 Franc Milburn is a geostrategic and national security analyst, with a specialization in UAP. One of his aims is to inject discourse on the geostrategic, national security and weapons technology implications of various phenomena, into mainstream academia. He is a former intelligence officer, and an alumnus of Sandhurst and the London School of Economics.

Milburn poses the question: “Why are strategic, national security and modern international history courses at universities not covering UAP when they have clearly occupied the major powers for decades?”

Previously, Milburn has written on the Middle East and strategic issues, and now he has had a paper published on UAP, by the Begin-Sadat Center for Strategic Studies (BESA Center) at Bar-Ilan University in Israel.

According to its website, the BESA Center “..is an independent, non-partisan think tank conducting policy-relevant research on Middle Eastern and global strategic affairs, particularly as they relate to the national security and foreign policy of Israel and regional peace and stability.”

The paper is listed as “MidEast Security and Policy Studies Paper #183” and is titled “The Pentagon’s UAP Task Force.” In preparing the paper, the author communicated with a range of individuals, both in the UAP field ( e.g. Dr. Jack Sarfatti; John B. Alexander)  and in academia (e.g. Dr. Lani Kass, senior fellow at the Mitchell Institute for Aerospace Studies.)

It opens by introducing the Pentagon’s UAP Task Force (UAPTF), and poses the question as to why the lead agency isn’t the US Air Force? It discusses the contents of the 17 June 2020 Senate Select Committee on Intelligence report on UAP and the UAPTF.

Milburn then explores the question of whether UAP might be “…exotic American tech, near-peer adversary platforms, or something else entirely.” This is followed by a discussion of the five observables of UAP, and a quote from Christopher Mellon, a former Deputy Assistant Secretary of Defense for Intelligence, that: “…These are not American or Russian or Chinese vehicles.”

Returning to the question of near-peer adversary knowledge, Milburn writes:

“The Chinese will be following the work of Davis and the UAPTF and have seemingly already approached Jack Sarfatti, and DI55 noted their interest in UAP two decades ago.”

All, in all, an important paper, summarizing a range of sub-topics in the study of UAP. Especially so, when you note where the paper was published and its anticipated readers.  Milburn is to be congratulated for writing this paper; and the BESA Center is to be thanked for publishing the paper.