You are here: Home / MUFON / Multi-colored “Sound and Light” Show Over Ohio 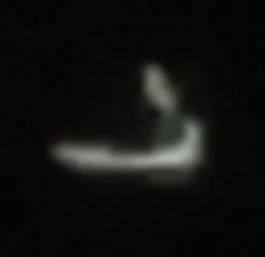 Case 113457: This must have been an exciting ride.  Eddie [last name withheld] was driving with two friends when they first saw the stationary, white, “star-like” orb in the sky.  It didn’t last that way for very long.  It was doing a “dance” in the sky, jumping and bouncing around the field of view of his video and still camera shots.  For the next 1-½ hours driving up to 95 mph, Eddie and his friends chased, what he calls a “boomerang”, all over Shelby county.  Eddie described the object as a “boomerang”, but this writer would describe it as an “orb”.  The orb “changed direction”, “cast light”, “flashed randomly”, and, most unusually made a “humming” noise!  It must have been exciting.  You can hear the excitement in the voices of all three witnesses as they pursued the orb.  Apparently, the orb would slow its speed so that Eddie could keep up with it in his car.

On his MUFON CMS report, Eddie said that it initially hovered, descended, ascended and moved around wildly.  Viewing the videos, the orb was jumping around from corner to corner and changing colors.  You can see white, gray, green, and red in the videos and in the images below.  Eddie also claimed that it was also blue, blue-white and yellow-orange, constantly transitioning from one or more colors to others.  The “Italian tri-colors”, green, white and red, are shown below.  The object had fuzzy edges, blinked, pulsated and glowed.  His estimate of size was 10 to 30 feet in dimension, appeared generally at 50° above the horizon, and its lowest altitude was treetop level. He estimated the distance to be approximately 100 feet to 500 feet from his car.  It also affected the quality of the sound on his cell phone.

Sidney, Ohio, is approximately 35 miles north of Dayton.  Dayton is the home of Wright-Patterson Air Force Base.

This post was originally published by MUFON News on February 8, 2021 7:00 am. Please visit the original post to read the complete article.