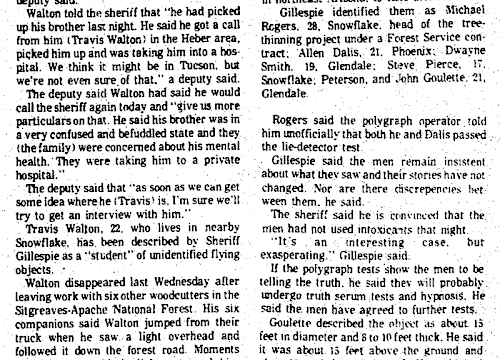 The Navajo County Sheriff’s deputies said Sheriff Marlin Gillespie received a long distance phone call about 9:15 a.m. today from a man he recognized as Duane Walton. Walton said he was calling from Tucson, a deputy said.

Walton told the sheriff that “he had picked up his brother last night. He said he got a call from him (Travis Walton) in the Heber area, picked him up and was taking him into a hospital. We think it might be in Tucson, but we’re not even sure of that, “a deputy said.

The deputy said Walton had said he would call the sheriff again today and “give us more particulars on that. He said his brother was in a very confused state and they (the family) were concerned about his mental health. They were taking him to a private hospital.”

Walton’s mother, Mrs. Mary Kellet, had said Monday though her son Duane that she believed her son was carried off in a spacecraft and that further search for him was futile.

Goulette said the beam came from the bottom of the object, “in a saucer shape, just like you’d see in a movie.

This post was originally published by The UFO Chronicles on February 3, 2021 7:56 pm. Please visit the original post to read the complete article.