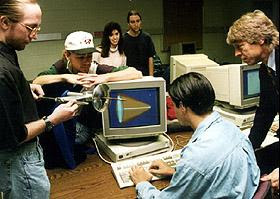 In my last blog, which concerned the McDonnell Douglas Corporation’s then “secret” UFO study, between 1967 and 1970, I spoke of their search to look to develop new aerospace technologies, based on studying UFO “observables.”

In an article dated 24 September 2020, titled “Blasting The Air In Front of Hypersonic Vehicles With lasers Could Unlock Unprecedented Speeds,” The Warzone journalist Brett Tingley spoke of a long term research goal. Namely, drag reduction of an aerospace vehicle by directed energy deposition. In simple terms, working to condition the air in front of an air vehicle so as to reduce drag and hence increase its speed. The article mentions that one of the ways to do this, was suggested by an individual named Leik Myrabo, who “proposed using lasers to literally expand the air in front of a high speed craft.” According to Tingley, this was in 1983. Interestingly, there was no mention of Myrabo’s links to UFO research, in the Tingley article.

In 2011, US researcher Christian P. Lambright published a book titled “X Descending.” (X Desk Publishing. Kindle Edition. ASIN: B007LSDHQ8.) Included in the book was an account, that in early 1986, he visited US UFO observer Ray Stanford, in Austin, Texas to view some of Stanford’s photographic documentation of his UFO sightings in 1985. Included in Stanford’s collection were shots of:

In 1995, Lambright came across the work of a professor at the Rensselear Polytechnic Institute concerning the use of energy beams to reduce drag on an aircraft. That professor’s name was Leik Myrabo, the same individual mentioned in the Tingley article. Lambright contacted Stanford to tell him about this research, but Stanford interrupted and said:

” Oh that must be Leik Myrabo from RPI. He was here at my house a few years ago and spent three days looking at my films!”

Later, after sighting a letter from Myrabo to Stanford, Lambright determined that the visit had been in March 1987. Thus, at least, Stanford’s photographic documentation, confirmed some of Myrabo’s own ideas, and perhaps stimulated other ideas.

Myrabo (right) watches as students at Rensselaer run a computer simulation for the air spike wind tunnel test on the Lightcraft model held by the student at left. (RPI photo)

Another, earlier, Myrabo UFO related account was given by Lambright, later in his book. In early 1978 Myrabo wrote to a Dr. John Warren expressing interest in Waren’s 1977 MUFON UFO Symposium paper titled “The Scientific Method of Investigating UFOs.” Myrabo supplied Warren with a copy of a paper Myrabo was to give in April 1978. This Myrabo paper, featured “…sketches of disc-shape vehicles – including a brief claim of the possibility of using beamed energy to mitigate shockwave effects.”

So, it is clear from both the 1978 Warren episode, and the 1987 Stanford episode, that Myrabo was open and interested in the details of UFO “observables.” Another example of a main stream scientist using data from UFO studies to suggest a way forward on a scientific problem.