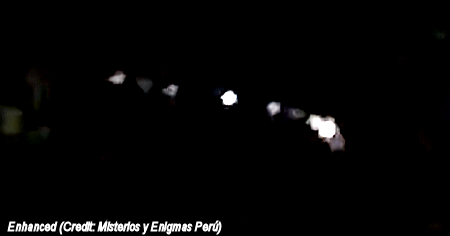 In Piriápolis, a coastal community along the River Plate located 100 kilomteres from Montevideo, it was possible to see a UFO crossing the sky and seemingly descend near Cerro del Toro. The incident was recorded.

showed an enormous circular and/or arrowhead-shaped craft which crossed the sky, giving the appearance of descending near Cerro del Toro, located nearly 5 kilometers outside the city.

The most important feature of the recorded material (see below) is that it was taken by a resident of Barrio La Falda who could see the UFO clearly as he spoke with two other people, while many others also witnessed the event. The video’s other relevant feature is that aside from its clarity, despite the fact that it ocurred at night, it was possible to ascertain that it was not an airplane or any other known object, with a duration of over four minutes, which is a rarity.

At one point in the conversation, one of the witnesses expresses the possibility that the sighting could be people coming down the hill with flashlights, but the images do not show this (given the distance of 5 kilometers) and do show an enormous circular or arrowheaded craft with various colors, with a sequence that was hard to explain. It should be noted that these people had previously taken UFO photos in 2020.

The event was investigated by renowned Uruguayan ufologists such as Gustavo Farías and Richard Karlen. According to Karlen, he ratified the continuous ‘visits’ to the country, as only a few days earlier he had managed to take a photo of another strange craft in Playa La Mansa, Punta del Este, in broad daylight.

This post was originally published by The UFO Chronicles on February 16, 2021 6:21 pm. Please visit the original post to read the complete article.