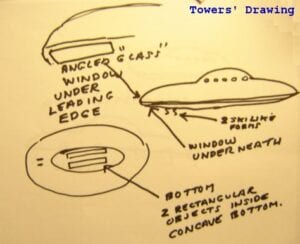 The following case file was written by BJ Booth of UFO Casebook, and is used here with permission. It can not be reproduced without prior permission.

Summary: Close up sighting of extraterrestrial craft by wife and I.

No. of Object(s): Single

It was one warm summer Friday around 10:00 PM in the evening in California’s Santa Clarita Valley. I was brushing the swimming pool with a long pole and attached brush so that the kids could swim the following day. The pole requires you reach up to push down. I was standing on a high platform next to and overlooking the pool and about 4 feet over the rest of the pool area. As I reached to upper end of pole, I saw a craft approaching the house from about 1-2 blocks away and from the West and heading South East.

I knew right away that it was not a helicopter or plane. It seemed flatter and wider and with lights in a circumference of the main frontal area. I ran towards the house and called my family to see it. Only my wife came out. By that time it was directly over our house and pool.

It was approximately 75-100 feet above us. We stood along side of the pool deck. It made no sound whatsoever, and it was at a complete stopped over us for about 40 seconds. The only motion was a slight wobble and when it moved and tilted downwards at an angle. I took this as some form of acknowledgment. During the entire time, we were frozen in disbelief. It is a strange sensation knowing that what you are seeing is not supposed and very foreign. It was like seeing a Greyhound Bus floating over your house!

The craft was about 75-100 feet in diameter. It had small porthole and lights around it in the upper dome section, it was solid, metallic and shiny. There was a dome in the upper section attached to the body with no visible separation, as if it were molded as one solid craft. The under section was concave towards the center and had two rectangular shapes along side each other and the length of the concave under-section.

The rectangular shapes were about 7-10 feet in width and as along as the craft’s concave underside center. I also noticed ski like devices on the front and on each side of the front leading edge window.

What caught my attention was that the devices were not in the center or the “center of gravity” for the craft’s length and design but very forward. The skis were S shaped with the top of the S facing forward but a design I could not replicate.

Upon the craft leaning in a downward motion we could see a window or cockpit like glass that was situated in the underside, it was on the front lower edge of the round craft. The rectangular window was approximately 4 feet in height and possibly 12-15 feet in length. There was a glow of soft orange and blue lights from the inside but we could not see anyone or any controls.

It remained at a forward and downward angle for about 10 seconds. We both had the sensation of being watched. As it was angled, I noticed that light was emanating from the upper section that was not facing the swimming pool lights. Thus, it seemed to generate light through skin of the craft as the lights that first attracted me faced forward and were much lower than the upper section of the craft.

My wife and I did not say anything to each other during the experience but she kept saying “oh my God” over and over again. The craft then left slowly at 30-40 MPH. I jumped on a wall around our property to continue seeing for at least 7-miles. I instructed my wife not to discuss it, to draw what she saw and then we would compare drawings.

They matched, although mine had more detail and accuracy.

My background include Group Propulsion Systems and later as an executive with several major computer companies. What we saw was close, real, solid, and a beautiful designed craft. I know from my aeronautical engineering background that mankind has no such technology

The Alien Agendas: A Speculative Analysis of Those Visiting Earth
£14.97
Buy on Amazon
Bestseller No. 2

UFO Chronicles: Aliens On Earth
£7.99
Buy on Amazon
Bestseller No. 2

THE UFOLOGY UMBRELLA: Close Encounters Are Not Enough
£13.75
Buy on Amazon
Bestseller No. 3

Extraordinary: The Seeding
Buy on Amazon

The New Human: Awakening to Our Cosmic Heritage
£15.00
Buy on Amazon
Bestseller No. 2

Antarctica: Alien Secrets Beneath the Ice
£12.99
Buy on Amazon
Bestseller No. 2

A Day with an Extraterrestrial: A trip to planet Uranus
£2.32
Buy on Amazon