You are here: Home / Scientific Research / Chris Mellon and those videos 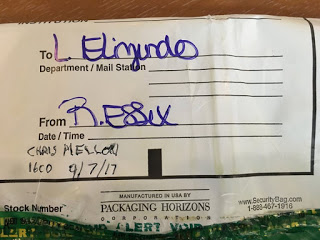 On 23 October 2020, Alejandro Rojas published an article written by himself, titled “How US Intelligence Community Insiders Got the Senate’s Attention Regarding UFOs.” Regarding the source of two USN UAP videos given to the New York Times for its November 2017 article, Christopher Mellon is cited as stating:

“I received the videos. the now-famous videos in the Pentagon parking lot, from a Defense Department official. I still have the packaging.”

Now, that last bit of the statement is interesting, namely, that Christopher Mellon says “I still have the packaging.” This is because on 7 August 2018 Twitter user @Jay09784691 posted several tweets about the existence of a number of images, which had been found on a US website belonging to Christopher Mellon. One of these was the image below:

If this is the packaging referred to by Mellon, then can we glean anything further from the image? “Chris Mellon 16000 9/7/17” This is possibly the date and time when Mellon received the package, as this would be useful for creating a chain of custody of the material in the package. 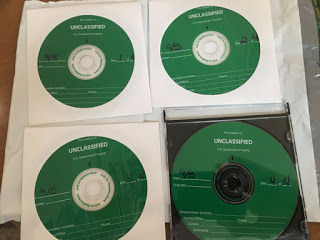 This image appears to be a set of four CD-R’s lying on a package. Many in the UAP community have assumed these CD-R’s contained copies of the videos. Note that the CD-R’s contain “Unclassified” material. The USN said at one stage that the videos were unclassified. There is also the number “9/5” which is probably 5th September, two days before the date on the Mellon package.

At about 22m20s In a YouTube video discussion dated September 2019, between Canadian researcher Grant Cameron, and U.S. researcher Richard Dolan, there was mention made of the manner in which the initial two United States Navy Unidentified Aerial Phenomena videos had been “released?” Cameron states that he had seen the images of the material from Mellon’s website. He had noted the name on the package which was not Elizondo’s or Mellon’s.  Cameron went on to say that he had checked out this individual via a contact he had in the Pentagon. It turned out that there was such an individual at the Pentagon; it was a female, in Public Relations.

Despite a check via FaceBook; LinkedIn and Radaris, etc., I have been unable to locate such an individual. Has any blog reader any additional information?