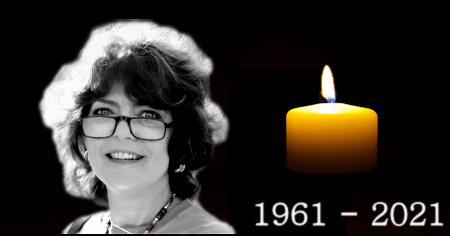 And when, one day last month, she announced how one of her friends had “died of Covid and now I have it also with underlying conditions,” she added this: “I will be fine.” Well sure. Of course. And maybe she didn’t have CV-19 after all, with testing reliability being what it is. Every time I’ve sneezed over the past 10 months, it’s like I’m seeing tiny skulls and crossbones in the mist. Yeah, we’re all on edge. But it’ll pass.

I’d scroll across an occasional update – she and husband Randell are both hospitalized now, oh – but despite the increasingly ominous developments, she was still striking a breezy tone. The dogs kept popping up, and she might toss in a glimpse of what she had for supper in bed. And she continued to be engaged with and outraged by current events, like the posting of the Nashville Christmas Day bombing.

And then, boom, January 6: “Fly high Randell! Now you have all the answers of the universe. Love you always!”
What?

Angelia’s reporting had made international headlines 13 Januarys ago, and her fearless dive into an issue for which she was totally unprepared was matched only by the principled stand she made weeks later, when she realized she had outgrown the walls of the Empire-Tribune in rural Stephenville, Tex. It was an incident that other reporters might have easily blown off; instead, it would become one of the most well-documented cases ever. It caught Carswell Air Force Base in a lie, forced a public retraction that vindicated the eyewitnesses, and raised questions about national security that remain unresolved to this day.
In fact, if the Pentagon’s Unidentified Aerial Phenomena Task Force is serious about its obligations to Congress come June, a fuller accounting of what happened when this reportedly massive enigma encroached on the no-fly zone above President Bush’s residence should be near the top of its to-do list. Less than seven years after 9/11, bin Laden still at large, an apparent flying machine without a transponder making a steady southeast beeline for the “western White House” in Crawford, the F-16s that were within eyesight of the thing an hour earlier suddenly nowhere to be found – and no military records exist? Really?

What little we do know, cobbled together largely through the detailed reconstruction of civilian radar data, is on file with the Scientific Coalition for UAP Studies. But the only reason we know anything at all is because Angelia decided to believe the witnesses who contacted her.

The piece did massive traffic – reporters from as far as Japan came to town, she shared the story on CNN’s Larry King Live, NPR, etc. etc. – but several weeks later, an editor informed her it was time to get back to local meat ‘n’ taters; after all, she was the paper’s only full-time reporter. Angelia argued the story was huge, it needed more coverage. The boss said no. Angelia submitted a two-week notice. The next day, her desk had been cleared out and she was told to scat.

When I learned the bad news on Friday, I went back over her FB posts for the past month, where she was unknowingly writing the final chapter of her life. It had gotten real on 12/16, with an update that she and Randell were both in the hospital in Stephenville. But this was more than a diary. This was a bedside plea for her 2,453 FB friends to mask up and wake up.

12/17: “Randell is in ICU on 60% supplemental oxygen … Do whatever you can to avoid Covid. It’s a really awful disease. Get the vaccine. You don’t want this.”

Her narrative was an ebb and flow of light and dark, hope versus reality. On 12/19, she linked to an Arkansas woman’s story who, given “just minutes to live,” has survived in “a miracle.” One day later, Randell was off the BiPap machine and “may go home tomorrow. I may go home tomorrow.” 12/21: “We won’t be going anywhere today.” 12/23: “The good news is the hospital has been sent helpers from FEMA. The bad news is I’m going backwards in my breathing for some reason …”

Through it all, she celebrated Trump’s courtroom defeats and Christmas memories alike. If only she could get on the other side of 2020. But the numbers kept stacking up.

12/24: Link to “Texas college student, 21, dies after long battle with COVID-19.” 12/25: “Very slow going to get weaned off the oxygen. And Randell on more than me.” 12/26: “Diminished lung capacity. Has to get better than this!” 12/29: “Still cannot get up without breathing hard, huffing and puffing.” 12/30: Link to “Congressman-elect Luke Letlow dies after Covid diagnosis.” A photo of her bleak hospital corridor: “So scary.” Link to “’Gilligan’s Island’ Star Dawn Welles Who Played Mary Ann Dead at 82 from COVID.’”

12/31: “I wasn’t able to stay on the lower amount of oxygen. It was okay while I was still but when I got up my saturation sunk like a rock and I could not breathe…” She shared a story about a man in Santa Fe who who sued New Mexico for the right to touch his wife, confined to a memory care clinic. Then came a picture of her grandson in a high chair, Christmas tree in the background. And a shout-out to her many friends, who bombarded her with encouragement: “Happy New Year! I hope everyone has a great 2021!”

1/2/21: “It makes all the difference to have a great nurse who understands panic attacks. Thank you Jeannie!” Another pitch for homeless dogs: “Can anyone help?” More news from quarantine: “Please stay home. This disease is nothing like the flu or any other pneumonia I’ve had.”

Another repost on 1/3: “Virginia state senator dies from COVID-19.” Forty minutes later: “So hard to breathe in through my nose and out through my mouth. I instinctively want to mouth breathe …” 1/4: “Randell needs every prayer you can muster!” Then: “They are looking for a bed for him in a bigger hospital. He could not keep going like he was.” Hours later, Randell has been airlifted to another hospital: “… I feel your love and support wrapped around me. It is very much appreciated. We need a miracle.”

1/5: Repost of a BBC piece, “Mum’s ‘heartbreaking’ death next to daughter in hospital.” Angelia: “So sad. The treatment is hard to take. I understand not wanting to suffer anymore.”

1/6: Randell succumbs to CV-19 on the day of the insurrection in Washington. Hours later: “Friends and family I am Being moved to ICU now. Can’t maintain my oxygen in regular room now.” She issues a few followup statements in the comment thread: “I am trying to fight but I am so weary,” “I would be a fool to say I’m not scared to death …”

Those are for us, the lucky ones they’ve left behind.